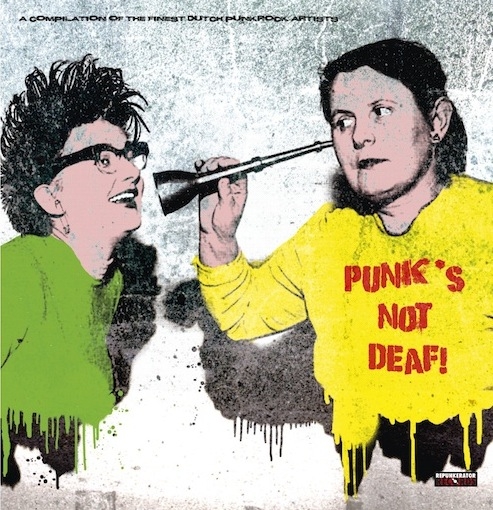 Edward van Tilburg and Arjan Boonacker were both part of the first incarnation of the Tröckener Kecks
and are heard together on thei debutsingle "Rik Ringers" (1981).
Later on Boonacker started Frites Modern in 1982 with Jos Belt and Barend van der Meer
and the rest is history. at the releaseparty of Punk’s Not DeaF
on sunday, the 24th of februari in Paradiso, Amsterdam.

"The Rest Of Frites Modern" downloadable from october 27th.

With tracks from compilation LP's, the legendary "6Met" cassette and a never before released live track:

As of today, the album ‘Veel, Vet, Goor en Duur’ from Amsterdam punkband Frites Modern is available as digital download. This ends two decades of unavailability of the ultimate Dutch language punk classic from 1984.

Frites Modern was founded in 1981 by guitarist/vocalist Arjan Boonacker after leaving the legendary Amsterdam punkband Tröckener Kecks. Starting with contributions to the Dutch punk compilation ‘Als Je Haar Maar Goed Zit’ (1982) and the self owned and distributed cassette tape ‘6 Met’ (1983), ‘Veel, Vet, Goor en Duur’ was the debutalbum of Frites Modern. The group toured to high acclaim all over Europe and visited cities like Copenhagen, Berlin, Milan and Barcelona playing their melodic punksongs in the Dutch language. Frites Modern LP’s also found their way to the United States and Japan. Songs from Veel, Vet, Goor en Duur are still played at American college radio stations.

“This is a magnificent album, one of the best thus far in 1984. First of all, the extraordinarily powerful sound whacks you across the face, then you realize how superb the band is and how well-crafted the songs are. Most are in the hook-filled fast to medium paced vein (like "Als je Haar. . ." and "1000 Aspirines"), but there are also a couple of adrenalin American-style thrashers (the satirical "U.S.A ." and "Bedankt") and some slower, older-style numbers (like "Een Droevig Verhaal"). The potential hinted at on Frites Modern's earlier "6 Met" tape has been fully realized here. (Jeff Bale – Maximum Rock ‘n Roll, USA, 1984)

The exhibition ‘35 Years Of Dutch Album Sleeves’ (Amsterdam, 1991) landmarked ‘Veel, Vet, Goor en Duur’ as one of the ten most remarkable Dutch album covers ever.